The title of Cowboy can mean many different things in this day and age. We think of a cowboy as someone who trains horses, or rides in the rodeos, or maybe a cattle rancher who still uses horses to work cattle, but being a cowboy was something different a 100 years ago.

When someone talks about the old cowboys that make life in the west so interesting, it brings to my mind a somewhat fearless, thrill seeking cow hand. The old cowboys were many times reckless and devil may care type of individuals who loved horses and were hired by ranchers to drive or care for their cattle.

The very occupation that these old time cowboys chose was fraught with danger and adventure. The horses they rode were wild and they only rode them after the horse had reached the age of 5 so they could ride them hard all day long. When a horse gets that old, basically running wild, they are not easy to train and often were broncs for their whole lives. 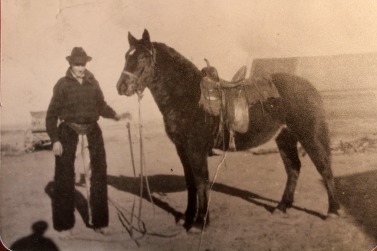 A cowboy typically had a string of horses that were his to ride, usually issued to him by the ranch he was working for. When he started in the morning, he would rope and saddle up one of the horses in the morning and it would usually buck when he got on. Then he took this horse out and do his daily work, which consisted of working or moving cattle, roping, doctoring, and branding calves and much more. He did his job all day on a horse that may have only been ridden once before that.

The cattle were also very dangerous in those days. Longhorn cattle were very wild and cranky animals that had horns on their heads to back up their dispositions.

A cowboy would have to be someone who enjoyed a good adrenaline rush to be sitting on a horse that had just been broken the day before (ridden once) and try to chase down and rope a cow that was as wild as an elk and had horns that could spread up to nine feet, tip to tip!

This taking their life in their hands appealed to a small number of men who could not get enough and remained true cowboys all of their lives. Life in the west would not be the same without these brave, thrill seeking men.

One such man, named Curt Diehl, lived and worked as a cowboy all his life in Broadwater and Meagher counties in Montana around 1900. He worked for many ranches in those areas and also had a homestead of his own, in a place called Watson, Montana.

One day, while Kurt and two other cowboys were sitting on a ridge overlooking a great valley below them. The Missouri river snaked its way, back and forth, across the valley floor, flowing in and out of tall stands of cottonwood trees. (Now this valley is Canyon Ferry Reservoir).

They were taking a break from whatever it was that they had been doing and were eating what little they had brought with them to eat for lunch. On the next ridge over from them a longhorn bull stepped out of some thick brush and started grazing along on the ridgetop.

What possessed him to do it will never be known, but Curt told the other two cowboys that he could ride that bull. They laughed and said they didn’t think that he could, probably thinking that it was just idle banter. Curt was serious, however, and said that if they could get a saddle on it, he would ride it right then.

When every day is taken up doing about the same thing, any change or chance for entertainment is rarely passed up. It didn’t take very long for the other two cowboys to get the bull roped. One roped the head and the other roped the hind feet. Probably using a tree to anchor one end of the bull, they threw Kurt’s saddle on him and cinched it down tight.

Whether Curt was serious about riding that bull when he first stated the challenge, I don’t know, but now he had to save face because they had done exactly as he said and the rest of the show was up to him. So with fear or excitement, or maybe a little of both, he swung up on that wild bull and they turned him loose.

Unless they are flanked (a rope put around their flanks to “tickle” them into bucking as in a rodeo), a bull rarely bucks very hard. Instead they think of doing whatever necessary to get whatever it is off of their back. This means plowing through the densest brush that it can find to try and scrape the human off.

This bull was no exception to that rule and crashed headlong into the thickest, nastiest tangles of aspen trees, underbrush and tangles of rose bushes one could imagine, leaving a little bit more of Curt’s clothing, and probably small chunks of Curt as well, hanging in the thorns and sharp branches that were crashing into the cowboy in a never ending procession.

True to what he had said, Curt stayed aboard the brute all the way to the bottom of the foothills and down to the valley floor. The bull finally came to a halt and he and his rider waited for the other two cowboys to come up to them, whooping with joy and excitement at the ride that neither one of them were willing to make. But it sure was fun to watch.

They roped the bull again and got a bloodied and mostly unclothed Curt and his saddle off of the bull. All Curt had still clinging to his person were his chaps and some shredded tatters of long johns.

Curt may or may not have enjoyed that ride down the mountain, (probably not) but in all the rest of his life in the west, he never told another cowboy to saddle up a bull.

We use cookies on our website to give you the most relevant experience by remembering your preferences and repeat visits. By clicking “Accept”, you consent to the use of ALL the cookies.
Cookie settingsACCEPT
Manage consent

Any cookies that may not be particularly necessary for the website to function and is used specifically to collect user personal data via analytics, ads, other embedded contents are termed as non-necessary cookies. It is mandatory to procure user consent prior to running these cookies on your website.